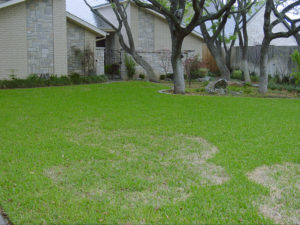 Do you have spots in your lawn? You have turf fungus diseases. What is turf fungus? There are 5 common turf fungus problems you should watch out for. Check them out below. Stop by Foreman’s General Store in Colleyville, TX, we have several products that can help you with the different varieties of Turf Fungus such as Headway Granules, Scott’s Disease EX, Fertilome F Stop, Fertilome Liquid Systemic, and Microlife Brown Patch Fertilizes.

Brown Patch Disease – One of the most widely spread diseases that can affect almost any cool-season turf lawn in many parts of the country is brown patch. When nighttime temperatures start hovering around 65 to 70 F in early summer, this disease can wreak havoc on tall fescue, Kentucky bluegrass, and perennial ryegrass. While it is relatively easy to identify (see brown patch symptom photo above), it can sneak into any turf stand and by the time you notice, it will be at significantly high levels. Fortunately, the solutions to control brown patch are numerous and effective. The QoI family of fungicides (strobilurins) are among the best fungicide options for control of brown patch because they offer up to 28 days of control, as well as control of other diseases that may occur at the same time.

Large Patch Disease – A pathogen similar to the one causing brown patch causes large patch on warm-season turfgrasses such as zoysiagrass and bermudagrass in the transition zone and South. While the pathogen may be the same, the symptoms of large patch are quite different from brown patch, in that they typically occur in spring or autumn especially under overcast, cool and moist weather conditions. As its name implies, large patch symptoms generally begin as small baseball-sized patches but can develop into automobile-sized areas. When the disease is active, off-colored turf around the edges of the patch can be observed with very thin existing turf or other healthy species that are not affected by the disease in the center of the patch. Control with fungicides is effective with applications the previous fall or in the spring at first sight of the disease. Multiple spring applications may be necessary to arrest disease development. Strobilurins, SDHIs (penthiopyrad, etc.) and combination products containing strobilurins and DMIs (azoxystrobin + propiconazole) are effective options for control.

Pythium blight is a foliar disease that can occur quickly in susceptible stands of turf, especially seedlings. Classified as a water mold, pythium outbreaks are generally associated with poorly drained soils or damp, humid conditions in the turfgrass canopy with little drying of the turf leaves. Newly seeded areas receiving daily irrigation can provide ideal environments for pythium development. Pythium blight symptoms include circular areas 1 to 3 inches in diameter and foliage can have a gray, water-soaked appearance and possibly white mycelium on mornings with dew. Fungicides are available for control of pythium (mefenoxam, etc.), but they need to be applied prior to observing symptoms. Once symptoms appear, fungicides are not nearly as effective in arresting the disease.

Pink Snow Mold – With a name like pink snow mold, one might think this disease would be easy to identify. However, pink snow mold is only pink for a short period of time and does not need snow to infect turf. In areas where cool, humid weather persists, the Pacific Northwest for example, pink snow mold can occur year round. Initial symptoms include small circular patches that may include a water-soaked appearance around the edge. Under very wet conditions, white mycelium may be visible in the patch and the margins may be reddish pink. The patches become tan and bleached of color under dry conditions. While there are options for controlling pink snow mold once the symptoms are visible, preventive applications are much more effective at keeping the disease at bay. DMI and strobilurin fungicides are the most effective and have the longest residual of control. Multiple applications may be needed as conducive conditions persist.

Summer Patch – While arguably not as prolific as some of the other diseases listed so far, summer patch and necrotic ring spot in Kentucky bluegrass can be one of the more difficult diseases to manage. Symptoms generally are expressed as circular patches of tan or brownish turf late in the summer. This particular disease does its damage in the late spring to early summer but symptoms are not expressed until the turf is under stress later in the summer. Once symptoms show up, control options are quite limited. Fortunately, preventive fungicide options are available to suppress, if not eliminate, summer patch and necrotic ring spot damage on turf. These applications should be timed in the late spring when the pathogen is active, targeting applications when soil temperatures reach 65 F. Strobilurins and DMI (propiconazole) fungicides are most effective. Once disease symptoms are visible, frequent irrigation to help the turf recover is helpful, but chemical control options are ineffective at this stage.

This entry was posted on Thursday, May 16th, 2019 at 4:21 pm and is filed under News & Updates. You can follow any responses to this entry through the RSS 2.0 feed. Both comments and pings are currently closed.