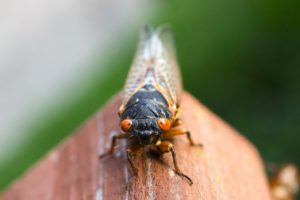 You know it’s summer in Texas when you start seeing cicada killer wasps. Foreman’s General Store has a wide selection of pest control products to get rid of these ground digger wasps.

If you see dime-sized holes appearing in your yard or garden, it’s likely that you have female cicadas nesting and making a home on your lawn. The female usually is harmless and non-aggressive while the male is very territorial and can attack. But don’t worry, the males actually don’t have stingers so they can’t sting you.

These wasps nests can become frightening when you see them in large numbers as they tend to do when nesting in dry sandy soil areas. However, these wasps are peaceful nectar feeders and occasional pollinators. The female wasps capture cicadas, which help reduce the noise level around the neighborhood during the summer. These cicadas are food for the growing larvae in those dime-sized burrows on your lawn or garden. So you see these wasps are actually helpful in reducing the cicada population and decrease the loud noise cicada’s make.

If you are really bothered by these insects then it’s recommended to use landscape fabric or mulch which will deter the females from returning to the same burrows. You can also use some insecticides from Foreman’s which will kill the larvae and some adults.

5 Species of Cicada Killer Wasps in the Americas

This entry was posted on Saturday, August 24th, 2019 at 4:49 am and is filed under Lawn & Garden, News & Updates. You can follow any responses to this entry through the RSS 2.0 feed. Both comments and pings are currently closed.